Skip to content
Nicki needs to grow up. If she fancies herself a queen, she needs to stop getting down off her chariot and throwing tomatoes.

In the last couple of weeks, the spicy bird known as Twitter was even spicier. Don’t get me wrong, regular twitter shenanigans were being had. However, the dropping of an album by a female monarch did not help matters. Nicki Minaj made her triumphant return to the charts with her newest album Queen. Now up until the dropping of this album, many things happened. One, I found out that Queen’s fans (aka the “Barbz”) are a few fries short of a happy meal. If anyone mutters a word that could even be deemed as negative towards their fave, they swarm on that person like a pack of locusts, flies, ants or whatever annoying insect you can think of. Quite frankly, the words do not have to be negative. It could actually be valid critique. Let’s go back a couple of months to this critique of the monarch:

As you can see, not exactly bashing. There are those who would argue this is a valid critique. I honestly thought it was valid but I also understand those who question why a female rapper is getting a critique that many a male rapper would never receive. How long did it take Hov to “grow up?” I saw both sides. However, Wanna’s critique did not warrant this: 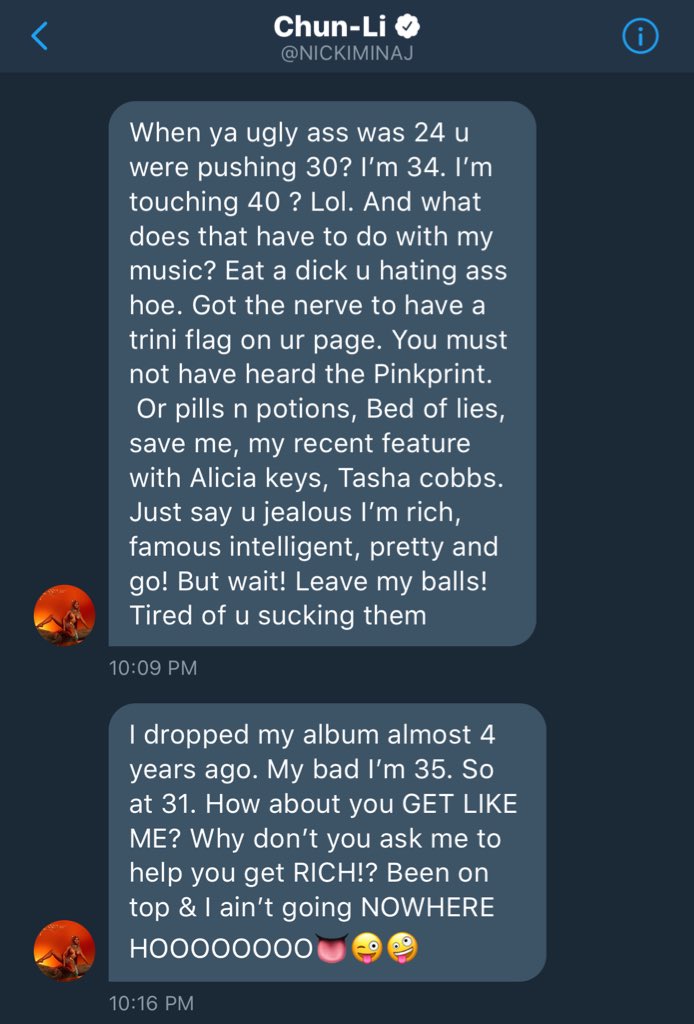 I cringed at this clapbback. Mostly because Nicki is NICKI MINAJ. She is not a slouch, she is elite. She wears designer clothing, has made music with Beyonce (which as far as I’m concerned means you have MADE IT) and should have honestly paid that critique dust.  These DMs are amateur hour. Mostly because Wanna did not even “@” her and also because Wanna was being INCREDIBLY fair. I have seen people write FAR WORSE and it did not draw the ire of the queen. I believe the only reason why Nicki even saw this critique is because her fans searched her name (which, by the way, Wanna didn’t even write FULLY so… there is that on that) and decided to send to her. That last statement I’m not sure is true because Wanna and Nicki were following each other. No matter how she saw it, she should have paid her dust. Or maybe I am basing that on what I would do if I was that famous. *shrug*

Now that we have caught up, let’s get back into the present. Nicki has dropped her new album and it isn’t exactly getting rave reviews. It also did not debut at number one: the top spot is being held by Travis Scott’s Astroworld. The great Monarch found that mighty suspicious and lashed out about this. She said:

I put my blood sweat & tears in writing a dope album only for Travis Scott to have Kylie Jenner post a tour pass telling ppl to come see her & Stormi. lol. Im actually laughing. #Queen broke the record of being number 1 in 86 countries. Thank Jesus & thank you to my fans.

First of ALL… you question why Kylie would promote her man’s tour when you had no problem promoting whatever MEEK was doing when you were with him? Um… HOOOKAAAYYYY.  Second, you are actually equating you not being #1 to Kylie bringing her baby on tour? A whole baby? Not your lazy promotion, not your lackluster singles… but a BABY?! Ma’am… I just don’t understand the logic.

There are some who are saying this is her “best work”; there are others who are calling the album “trash”. I have listened to the majority of the album; I am in the middle. Some of the bars are completely terrible (“He nuttin like SKIPPY NOW. He want me to be his wife, his MISSIS LIKE SIPPI NOW”) but there are a couple of songs that are good. “Majesty” may be a little disjointed but Labyrinth shines on this song. Ok, can I got back to that “nuttin like Skippy” line? First of all, if a man’s ejaculate comes out the consistency of the peanut butter, please take him to the damn doctor. Guys, I’m also aware she is not being literal but the line still bothered me. Also, her use of gay slurs in her music. Her fandom has a high percentage of members of the LGBTQIA community and you thought this was ok? GIRLLLLLLLLL.

When it comes to Madame Mirage, I will say this: Nicki, grow up. Like, I honestly mean that. GROW. THE. HELL. UP.  You are a STAR. I want Nicki to rise above this immature, insecure behavior. She is too damn old to be acting like this. She is also at a level where she SHOULD NOT be acting like this. You expect these antics from someone not on her “level” (aka Azelia Banks). She is being a *checks notes* DAMN BIRD.

Furthermore, on top of her being a damn goofball, she is also being a straight up hypocrite. She wants to highlight black women being shut down in the workplace (which is a fact) but had no problem shutting down Wanna and getting her fired from her internship at Karen Civil. She wanted “respect” from Cardi but seems to forget she wasn’t exactly all that gracious to Lil Kim.

Nicki is not used to competition and her antics dictate such. She honestly didn’t see Cardi’s success coming. Cardi’s album was great. Also, Cardi B. is great as well. She is authentically herself. Does Cardi lash out at fans who critique her? She sure does.  However, she is not being a damn bird about it. Female rap isn’t some highlander shit.  But Onika Mirage sure is acting like it is. Face it, you now have competition. Competition is good. It should fuel you. The bad thing is, it’s just making Nicki look insecure.

I am old enough to have seen this behavior from another rapper and it is still aggravating. It was a turnoff when Kanye did it and it’s a turn off now with Nicki. I may not be the biggest rap fan but I loved the diversity of female MCs growing up: Queen Latifah, MC Lyte, Yoyo, Lady of Rage, Trina, Da Brat, Lisa “Left Eye” Lopes, Remy Ma, Lil Kim, Foxy Brown, Salt N Pepa, Eve, Missy Elliott. I would love to see another huge all Female MC hit like “Ladies Night.” I’m just not sure it would include the latest incarnation of Nicki Minaj.

I can’t say this enough: Nicki needs to grow up. If she fancies herself a queen, she needs to stop getting down off her chariot and throwing tomatoes.