Skip to content
In honor of All Eyez On Me and Black Music Month, writer Jessica Franklin revisited her favorite black music biopics.

The long awaited Tupac Shakur biopic, All Eyez On Me, was released this month on what would have been the music icon’s 46th birthday.  I love Tupac. When Jay-Z said, “Ladies love me long time like Tupac’s soul,” he wrote that line for me. Yes, I’m in love with a ghost. I also love biopics. And musicals. Therefore, musical biopics are my fave. In honor of All Eyez On Me and Black Music Month, I’ve decided to revisit my favorite black music biopics.

Just the mention of this takes me back to lazy summer days as a kid when there was nothing to do but stay locked in the house and watch this long tail miniseries on BET or VH1. But it was worth it. About six hours long with commercial breaks and based on Katherine Jackson’s autobiography, we get to see her and Joe’s humble beginnings, the births of a few of their kids (most notably Michael), Joe’s crazy stage dad antics, The Jackson 5’s rise to fame and personal struggles, and, finally, Michael’s peak of superstardom. We also get to see a young jheri-curled Terrence Howard playing Jackie Jackson and Wylie Draper gives us one of the best fictional portrayals of Michael Jackson ever. No Flex Alexander here!

Laurence Fishburne and Angela Bassett were so believable and iconic in their roles of Ike and Tina respectively that I still get mad that they didn’t receive Oscars.  What’s Love Got to With It chronicles Tina Turner’s life from an abandoned child in Nutbush, Tennessee, to a beloved entertainer, through a tumultuous relationship and marriage to Ike, to her discovery of spirituality, and finally to her eventually breaking free and becoming a music legend in her own right.  Glittered with exciting musical numbers such as “Shake a Tail Feather,” “River Deep, Mountain High,” and, of course, “Proud Mary,” and memorable lines like, “Eat the cake, Anna Mae” (which we make funnier than its actual context), this movie holds Tina Turner’s legacy in good hands. I remember my sister and me watching this premiere as kids while our parents recorded it on VHS – old school!  This same VHS became a staple for all holidays and family get-togethers where we’d watch the epic story of one of Motown’s greatest groups and hear the KING of black music biopics, Leon, spit lines like, “Ain’t nobody coming to see you, Otis!” in his unforgettable role as David Ruffin.  This is the movie that introduced my generation to the greatness of The Temptations, and I stop to watch it every time it’s on TV.

Casting was the key that made this biopic so great.  Drew Sidora, Lil Mama, and Keke Palmer BODIED their roles as T-Boz, Left Eye, and Chilli respectively.  I mean, Lil Mama totally got snubbed for an Emmy (in my humble opinion, of course)!  This movie also sparked a conversation about which girl group should be next to get a biopic, with candidates including SWV, En Vogue, and Destiny’s Child (but y’all know Beyonce ain’t having that).

When I found out Lifetime was doing a Whitney Houston biopic, I (and many others, I’m sure) had heart palpitations.  It came just months after their more-than-disappointing, Wendy Williams-produced Aaliyah biopic – which I don’t care to further comment on.  But once it was revealed that Angela Bassett was the director, I knew it was in good hands.  Yaya DaCosta (who should’ve beat Eva on Cycle 3 of America’s Next Top Model and I’m more than willing to debate this) did an amazing job as the music diva and I appreciate how the movie wasn’t shy about bringing Whitney’s substance abuse problems and marital issues with Bobby to light.  And shoutout to Deborah Cox for slaying Whitney’s songs!  Lifetime had actually redeemed themselves, but then they made that Britney Spears movie…

While Straight Outta Compton caught heat for omitting members of N.W.A.’s history of misogyny and abuse, casting (as with The TLC Story) was what made this biopic so great.  A talented cast filled with newcomer actors like Oshea Jackson Jr. (Ice Cube) and Jason Mitchell (Eazy-E, who also deserved an Oscar nomination – GIVE US OUR THINGS!) helped bring the members of one of rap’s most iconic groups to life in a convincing way.  It also helped with understanding the group’s intense relationship with law & order, giving us history behind incidents that helped inspire records like “F*** tha Police,” especially during a year (2015) where our people were in the thick of the Black Lives Matter Movement. 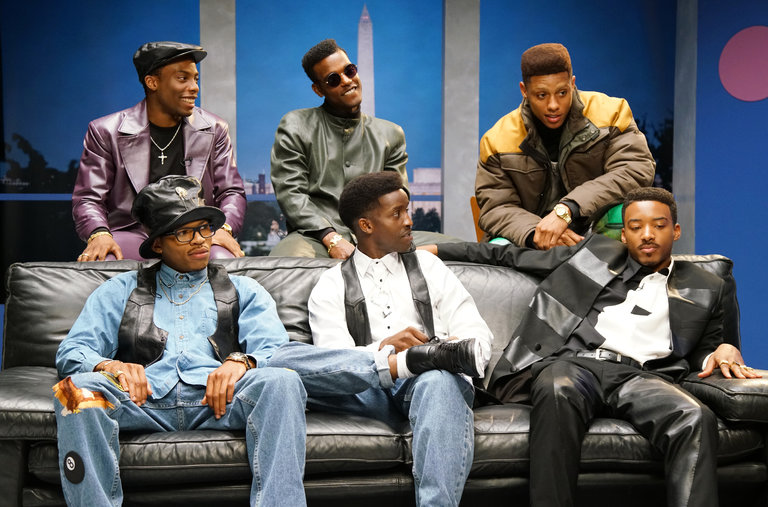 Like with Lifetime and Whitney, I was apprehensive when it was announced that BET was doing a New Edition biopic.  BET has failed us in recent years (typically in the form of excessive airings of Baby Boy), but they did not disappoint with this movie.  The uber-talented cast and acting was spot on in telling the story of New Edition from boys to men, detailing their struggles to exit poverty, dealings with shady managers, and difficulties within their personal lives.  BET, I’m proud of you!

What are some of your favorite music biopics?